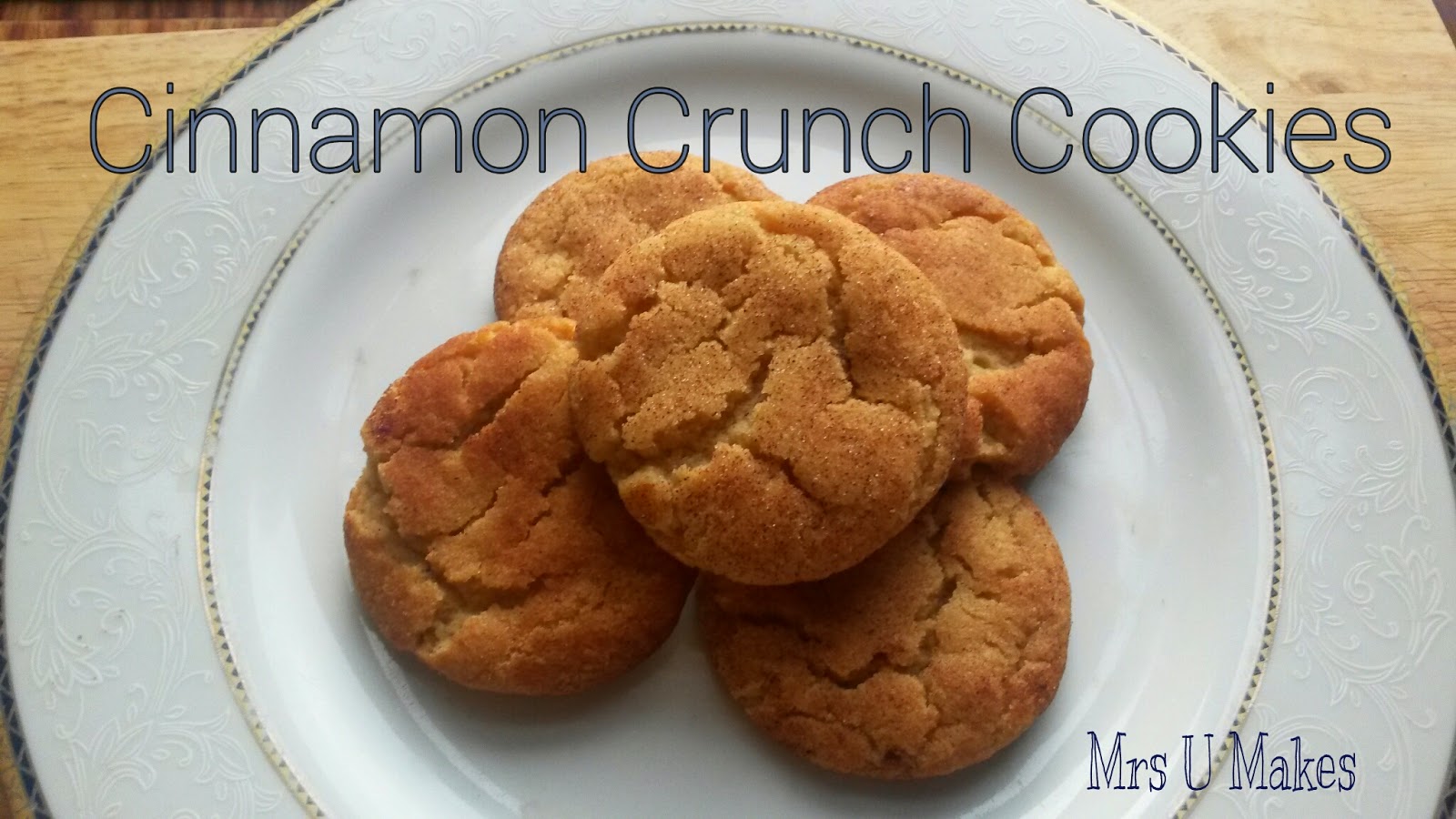 Biscuits seem to be the baking staple of the U household. It's the only baked good that the tripolatas are guaranteed to eat (I've tried apple pie, they ate the apples and left the crust).

Mr U (supposedly) only likes plain cakes, no frosting, no fruit, seed or nuts. So until my boys learn how to appreciate a good home made pie, my oven will be filled with biscuits and the odd cake.

For this reason I've been trying to come up with a new biscuit recipe. I'm getting bored with shortbread and biscotti, and didn't want to just copy someone else's recipe.

After some research I came up with Cinnamon Crunch Cookies, they're quick to whip up and can easily be adapted.

I made four batches before I was happy with them. The first batch was very well done. The second batch was a little less well done and I finally admitted that the cinnamon was a overpowering. The third one had the perfect cinnamon quotient but was still a little overdone.

Then finally these came out of the oven. 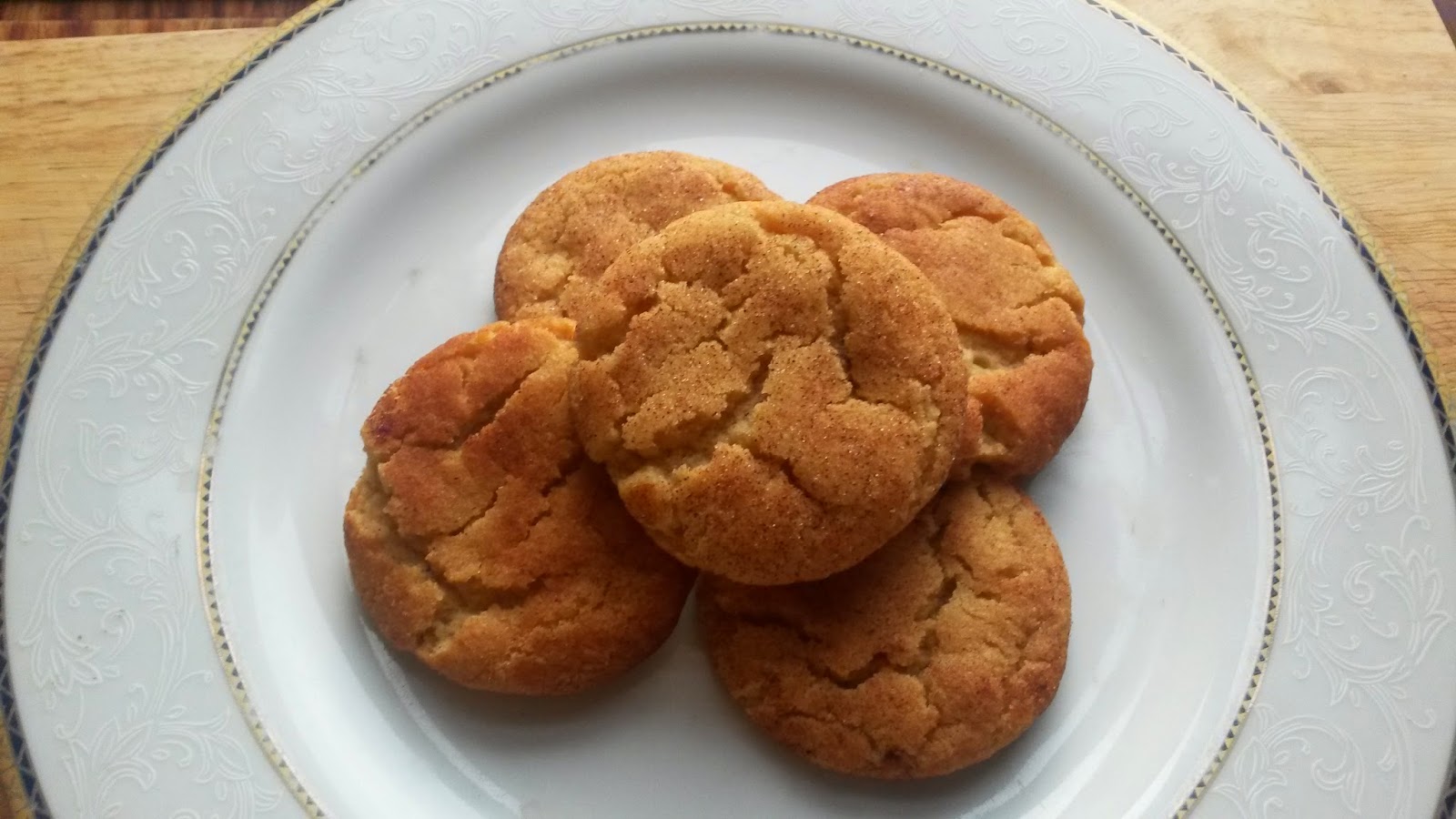 It worked, the tripolatas love them, and they made many attempts to swipe them straight from the cooling rack. At one point I had tripolata#2 in a fireman's lift, was holding onto #3's arm whilst trying to use my leg to stop #1 running into the kitchen.
They of course thought this was hilarious, and still managed to get more cookies. Kids =0

So here's what you'll need: click here for the video or go to the bottom of the page.

and this is what you'll need to do:

1.  Mix the butter and sugar together in a freestanding mixer or with an electric whisk until it is light and fluffy

2. Add the vanilla extract and honey, then mix again. 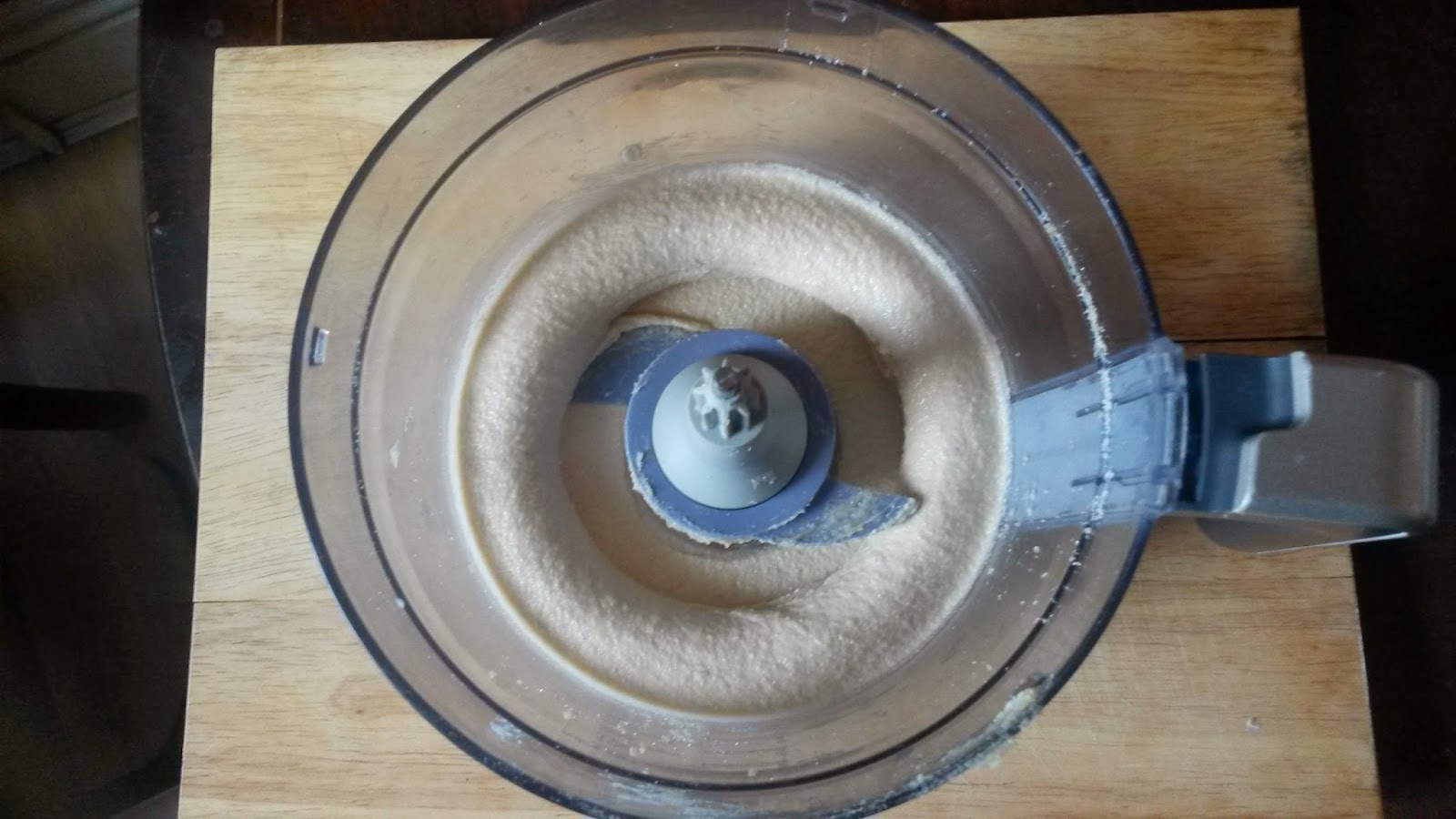 3. Add half the flour to a bowl and then pour in the butter and sugar mix. Mix these together until just combined and then mix in the remaining flour. 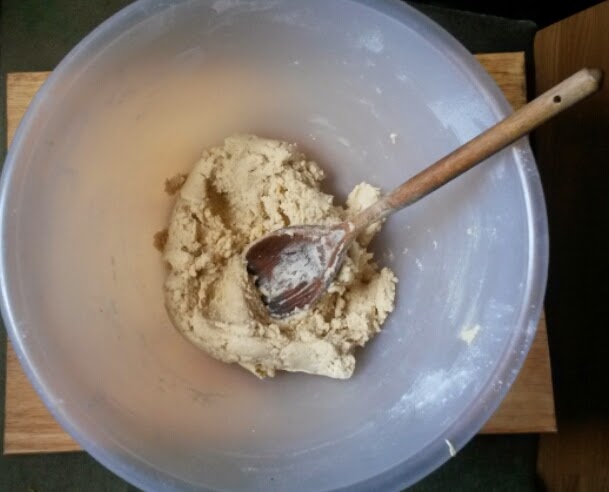 4. Pour the cinnamon and extra sugar onto a plate. Roll the dough into balls (about 25g each). Roll the balls into the sugar and cinnamon and then place on a greased baking sheet. 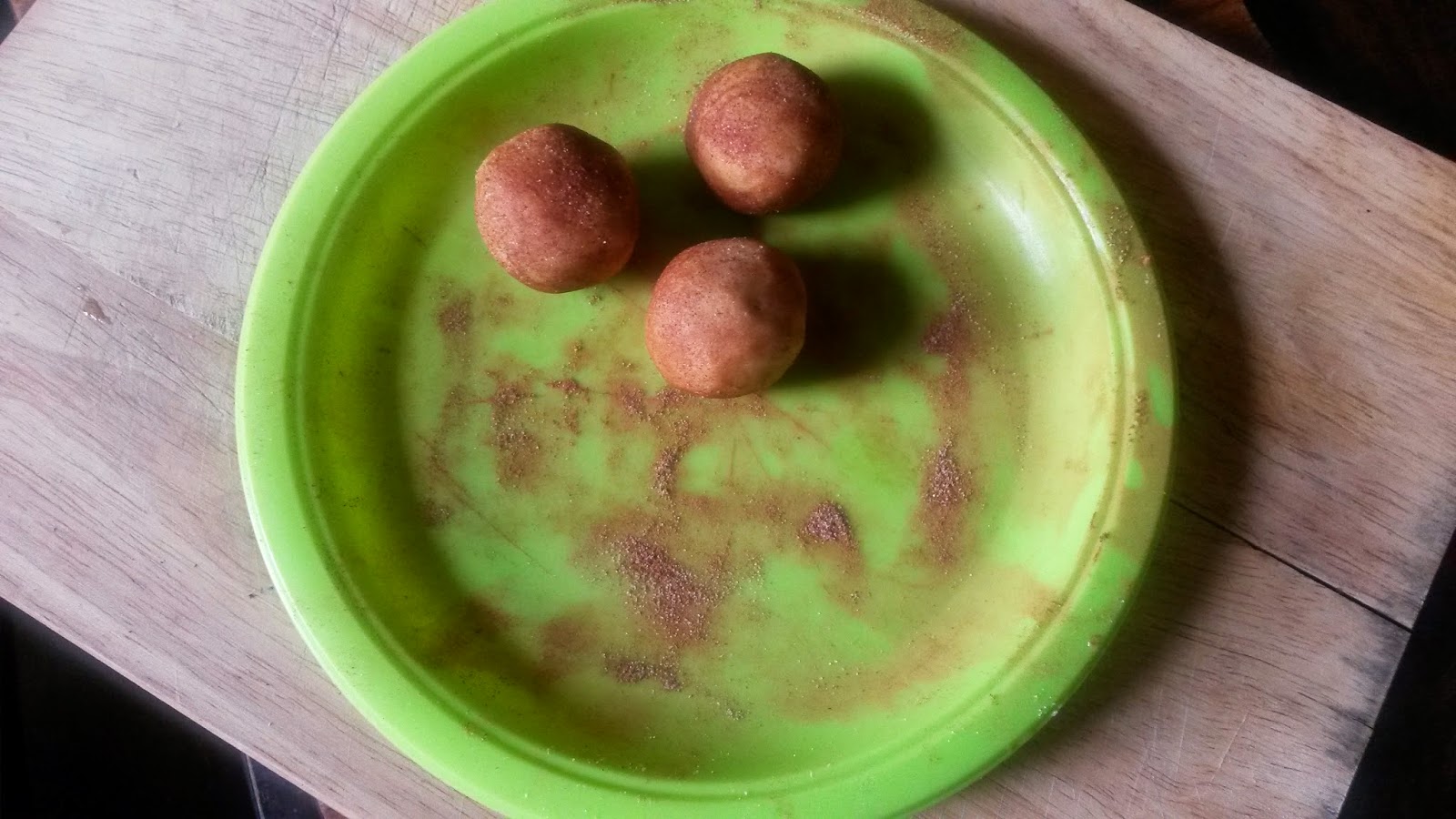 Don't flatten the dough and leave enough space for them to spread. 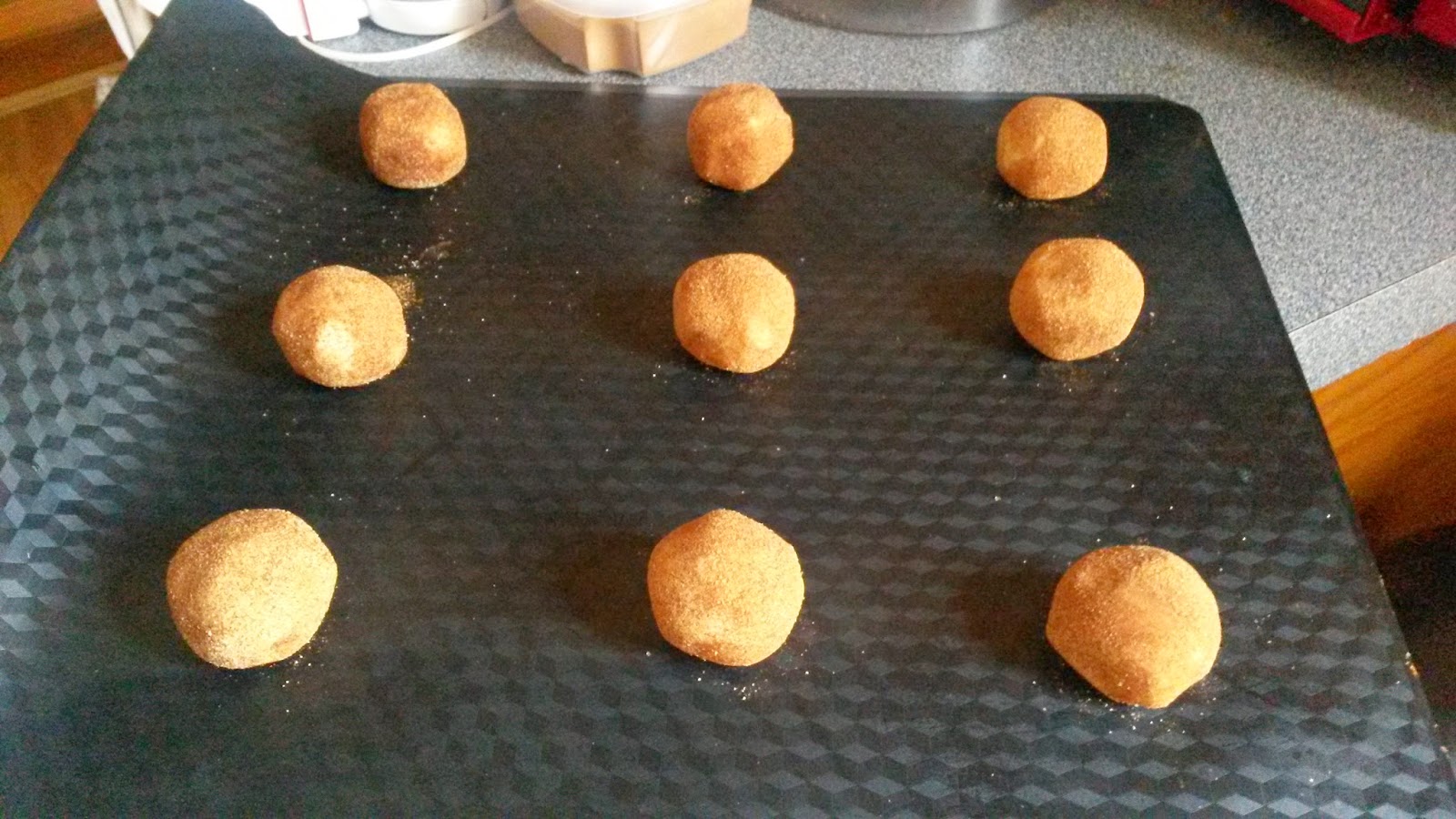 5. Place in the oven for 10-12 minutes, turning the baking sheet for the last two minutes to achieve an even bake.

6. Once baked, leave the cookies on the baking sheet to cool down before transferring to a cooling rack to cool completely.

Store in an airtight container.

Notes:
* If you don't want a massive cinnamon hit, sprinkle the sugar and cinnamon on the plate a little at a time.

* Mix up the sugar and cinnamon before each use or the sugar will sit at the bottom and the last batch will taste more like a Sugar Crunch Cookie.

I would love to know how these turn out.

Thanks for stopping by. I would love to know what you think.

My name is Diane aka Mrs U, I love knitting, crocheting, baking, and general craftiness.
You can follow me on social media, I also have a podcast called That's So Ewe, which you can watch on my YouTube channel. Don't forget subscribe so you can get the latest posts straight to your inbox.
If you have any questions or just want to say 'Hey', fill out the contact form at the bottom of the page.